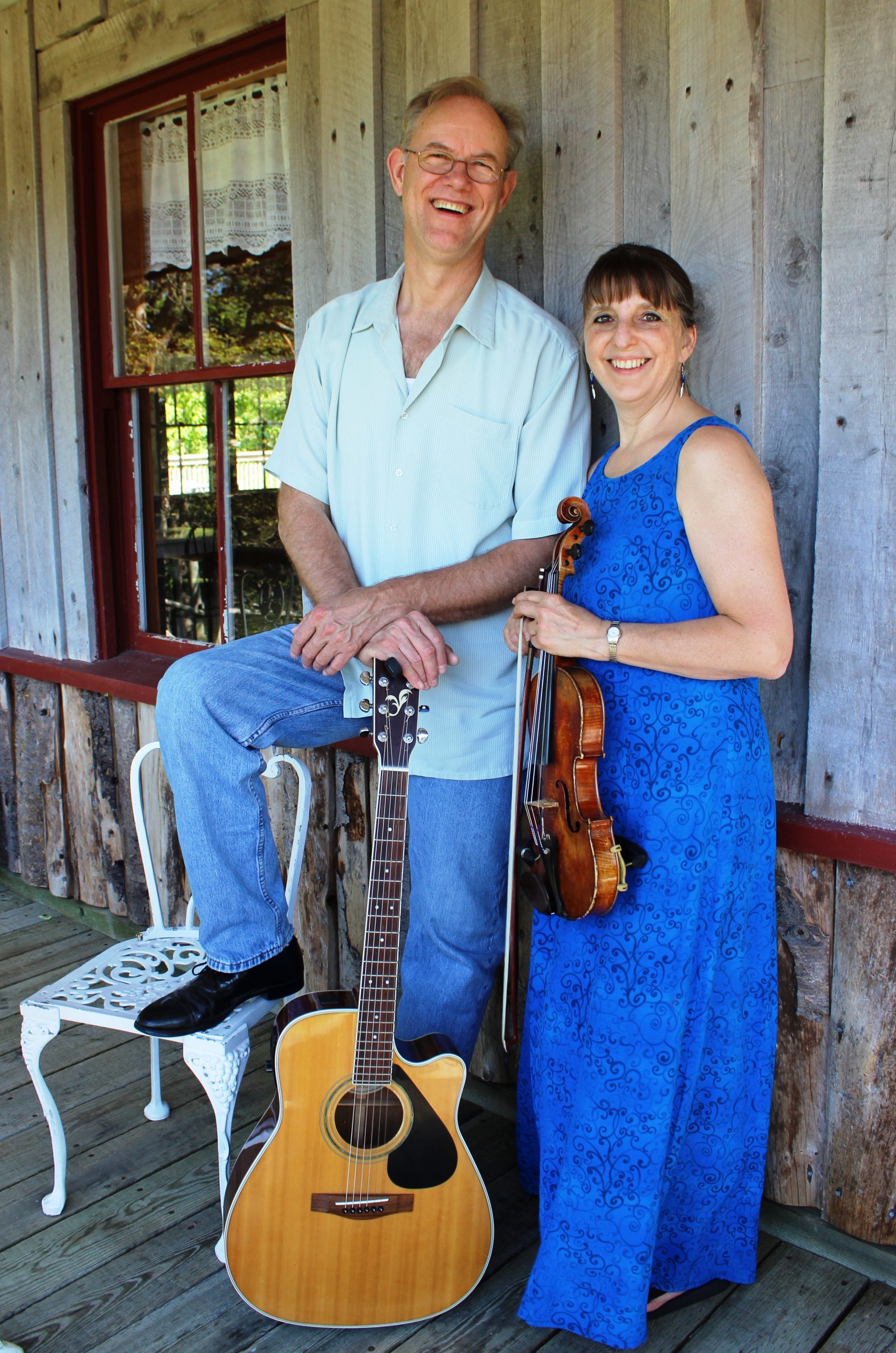 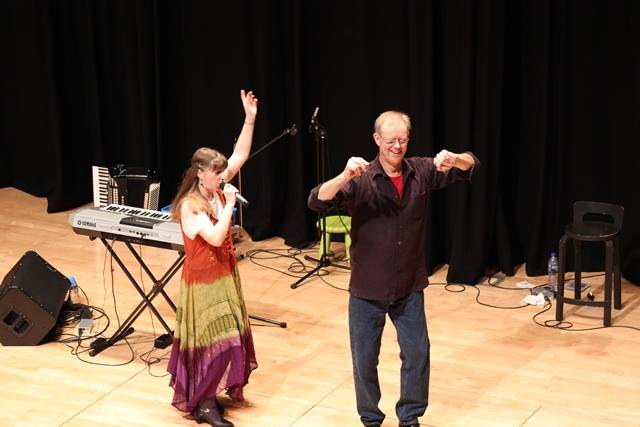 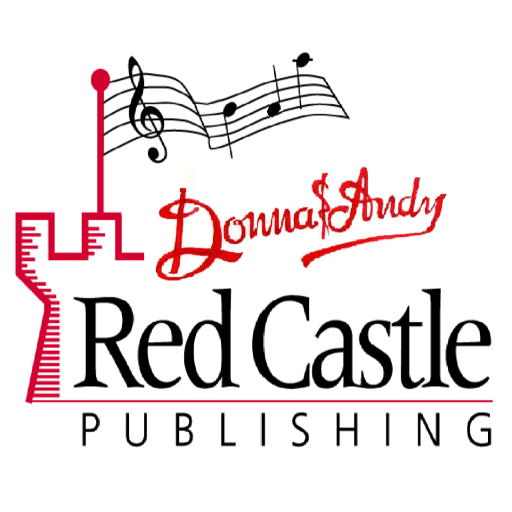 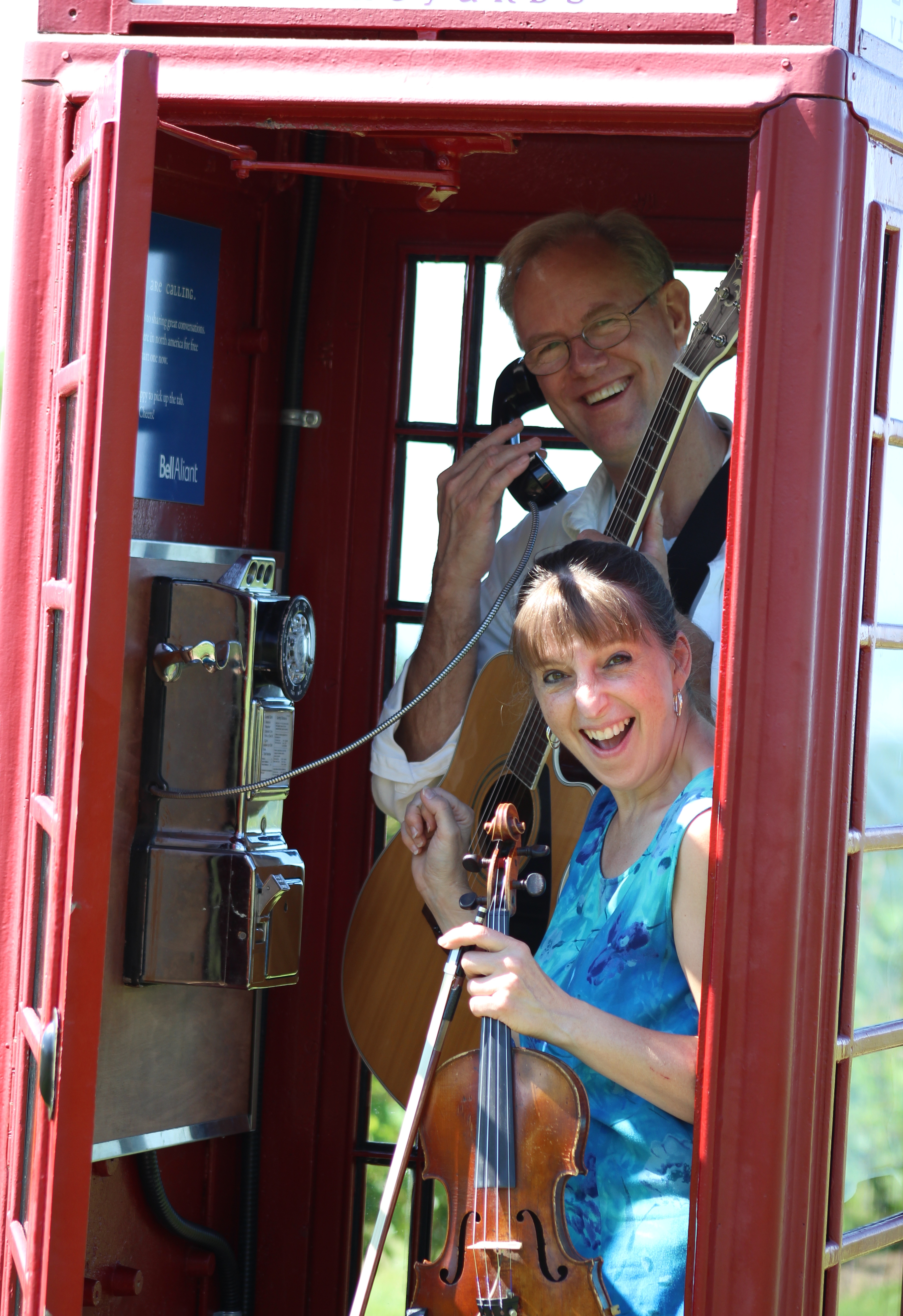 Performing together since 1996, Donna Rhodenizer and Andy Duinker wanted to share their musical talents with kids and families. 26 years later with multiple recordings and awards,

Donna & Andy continue to delight audiences with their music.

Donna knew she wanted to be a teacher from the age of 5 and she combined her passion for music and her love for teaching into a 35-year career in the elementary music classroom. Donna taught as a string specialist in the Kingston community string program, while studying music education at Acadia University. She was a member (and concert master) of the Nova Scotia Youth Orchestra and Acadia Orchestra. She did a year of graduate studies at Brandon University and then returned to Nova Scotia as a part-time string professor at Acadia University (a 2-year appointment) and spent a year as a substitute teacher in the public schools of Kings County. She taught elementary music at Windsor Elementary (where she discovered handbells!) and Gaspereau Valley Elementary before settling in at Kings County Academy in Kentville (25 years) from where she retired in June 2019.

Donna has made a name for herself as a music educator and as a composer. Her music can be found on almost every continent. She has written and self-published seven collections of original music and some of her songs are published in the Royal Conservatory graded vocal series used by private music teachers. Donna also has songs published by The Full Voice, Leslie Music Supply and Cypress Choral Music. She created a new recorder program, “Royal Recorders” and she has written over 200 compositions for choirs, handbells, violin and piano.

Donna received the NSMEA Musica Viva Award (2009) for her outstanding contribution to music education in Nova Scotia and the 2011 Jubilate Award of Merit from the CMEA for her significant contribution to music education in Canada. In 2019 she was awarded a Lifetime Achievement Award from the NSMEA. Donna is grateful for the support of her peers, and their interest in her music. She enjoys sharing her music both in her own classroom, and also in the classrooms of others in Canada and around the world. Donna is a passionate advocate of music and she enjoys inspiring others to join her in making music a vibrant and significant part of their lives.

Donna is an active performer and recording artist. As part of the duo, Donna & Andy, she is a Juno nominee and a winner of multiple awards from the East Coast Music Association and Music Nova Scotia, recognizing her work in the recording field. Many of the songs she performs and records are her own original tunes. In addition to Donna & Andy recordings, she recorded a CD of her own original instrumental compostions entitled Musically Yours, featuring her multi-instrumental talents on violin, piano and accordion.

Andy is a multi-faceted performer. He performs big band and swing standards, his own original songs, contemporary folk songs, traditional ballads, beloved sea songs, Maritime-flavoured songs and songs for kids. His extensive vocal range allows for both rich bass solos and lyrical tenor melodies to be handled with ease and fluidity.

Through the years Andy has been in great demand in a variety of singing groups. His experience in quartets, trios, barbershop ensembles, and community choirs afforded him the opportunity to create music in a variety of styles and settings. As a solo artist, he is able to draw on his musical experience to sing soothing ballads, lusty sea songs and jazz standards. Andy’s ability to present songs with rich vocal texture, clarity of tone and smooth range transitions set him apart from the ordinary. Folks say “he has a serious set of pipes”.

Andy performs with confident comfort and quickly establishes an emotional connection with his listeners. His gentle wit and humorous anecdotes endear him to audiences of all ages and, combined with his musical presentation creates a performance that will be remembered long after the concert hall has emptied.

He is equally comfortable performing for adult, mixed family, and children's audiences. In addition to being the featured vocalist in adult concert venues, he adds his vocal expertise to the duo “Donna & Andy”. They have performed for children in schools, festivals, and concert venues across the country for almost 25 years.

Andy has been involved in nine recording projects. His most recent recording (EP) "Come Dance with Me" features his vocals in some lovely old jazz standards with a big band sound. Fine Company is an easy listening, contemporary traditional/Maritime/folk recording featuring Andy’s bass/baritone/tenor voice. All five of Donna & Andy’s recordings Blue Skies & Pirates, Dinosaurs, Dragons and Me, Computer Cat, It’s Christmas Time and La vie pour moi have received ECMA and MNS Awards or nominations and they were nominated for a 2007 Juno.

In addition to performing and recording, Andy is a songwriter and often co-writes with fellow performer and songwriter, Donna Rhodenizer. He and Donna co-own Red Castle Publishing, the company responsible for publishing and distributing their recorded and printed music. Andy and Donna arrange songs for their own performances as well as publishing their original songs as choir arrangements. Their attention to lyrical and singable lines for each vocal section makes their music popular with choirs of all ages.

Andy’s professional performing skills are not confined to singing. He has ably performed the duties of MC, auctioneer, sports commentator and public speaker in a variety of settings.

Andy has 4 children and maintains a keen interest in their musical, athletic and career development. His interest in aviation has been passed on to one of his sons who is a commercial pilot. He closely followed his 2 daughter’s professional basketball careers. Andy’s interests have been a guiding force in his career pursuits. He was a Dance Instructor at the Fred Astaire Dance studios in Edmonton, a Smoke Jumper in the Yukon and North West Tertitories, and has worked extensively in the carpentry field. He has developed and operated several businesses, including the I Scream ice cream parlour, Shaklee health products distributor, and Atlantic Airsport Ultralight flying school. Andy was the manager of the Kings County Airport for almost a dozen years. In his youth he experienced the life of a farmer’s son and lived in the city of Toronto for a number of years. Life experience is not lacking in this man, and he brings all of that experience to his performing career.