Accordion in the Elementary Music Classroom 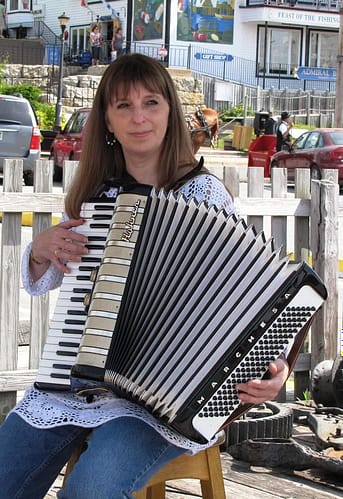 In the early 1970s, a very wonderful gift arrived at my family home at Christmas. My dad had contacted his brother who was stationed in Germany with the Canadian Armed Forces and asked him to procure an accordion and ship it to Canada for us. This was accomplished and a large package arrived. Inside a large grey suitcase was a beautiful Hohner accordion. It was a very large black accordion with gold accents and it was magnificent.

As a small 10-year old girl, the accordion was almost as big as I was. Strapping it on probably doubled my weight! I was unable to see the many buttons (120 of them!) on the left hand side of the instrument (I still cannot see them when I play, even as an adult) but I overcame that issue by sitting in front of a full-length mirror so I could see what my fingers were doing. The piano side of the accordion was not so daunting. I had been playing piano since the age of 5 so it was just applying those piano skills to a sideways keyboard – and I was off!

I listened to a record of Harry Hibbs, a Newfoundland accordion player for inspiration (although he played a button accordion). I decided I would try to learn to play “Scotland the Brave”. I didn’t know that it was such a well-known tune, I just knew I liked how it sounded on the accordion. Learning the melody was the easy part. Trying to use the buttons with my left hand to create chords proved to be a challenge. I pushed buttons until I found one that sounded good with the melody and hit upon the idea of just holding one button like a bagpipe drone. That seemed to work and “Scotland the Brave” became my first publicly performed accordion song. 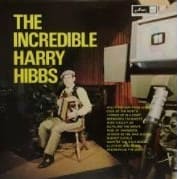 A family friend who had been travelling the world had sent us some outfits from various countries. One of the outfits was a Scottish kilt, jacket and tam and I was the one who was the right size to wear it! A photo taken by my grandmother shows me at age 11, wearing my Scottish outfit and posing with the accordion, probably preparing for a community variety show and my “signature” accordion tune.

My family often had Saturday evening music get togethers in the “front parlour” of our rambling old farmhouse. Our music room included a piano (and sometimes two), an organ, ukuleles and other small play-along instruments. We would congregate there with various relatives who would bring along their own fiddles and guitars. The accordion fit right in with the simple three-chord songs that we would play or sing and I learned to play a few more of the left hand buttons in that setting. (This is also where I got my start on violin, and learned how to chord along on the piano. Good times!)

Growing up with an accordion in the house

…was a very normal thing in the Rhodenizer clan. The uncle who sent us our accordion loved its sound and he purchased one for his own family at the same time. His accordion was a small, student model - a lovely compact instrument (only 48 buttons) and much easier to handle when travelling around. That uncle, nicknamed "Rhody”, is the inspiration for an accordion tune I wrote and entitled, “Tune for Rhody”. (Track #2 on my instrumental CD: Musically Yours.)

Another one of Dad’s siblings, my Aunt Marge, also loved the accordion. Her husband was stationed in Germany with the Armed Forces at the same time as my Uncle Rhody. He decided to purchase a Hohner accordion for Aunt Marge. It was large like ours and it was white with gold trim. When Aunt Marge passed away, her family contacted me and asked if I would like to have her accordion. I was honoured to be asked and delighted to accept their offer. Now I had a matching pair of sister accordions and my collection of family accordions had begun.

My dad’s youngest brother also bought an accordion. It had cherry-red casing and it was another large instrument. That accordion also got sent my way in later years and brought my accordion total to three. This red Hohner instrument is a different vintage and has a very different sound than my pair of “sister, salt-and-pepper” accordions.

Gigging on the Road with an Accordion (or two)

When Uncle Blair (“Rhody”) passed away, the small accordion was passed on to me for a time, just to give it a home where it would be played. I loved playing the smaller instrument when Andy and I would be at a gig where we were playing for a long period of time. I could switch from large accordion to the smaller one and give my arms and shoulders a break. Throw in a few fiddle tunes and vocal numbers and I would be ready to strap the big accordion back on and play a few more tunes.

At some point, one of my cousins thought he would like to play the accordion so Rhody’s accordion was returned to my uncle’s family. After a few years of sitting unused, it once again found its way back to me and I now provide it with its permanent home. Who else do you know who owns four accordions? I am happy to be able to house all of them but I don’t need any more. My accordion collection is complete!

Accordions are portable (and loud!)

The accordion is a great instrument for the music Andy and I perform (Donna & Andy) at elementary school concerts, garden parties and summer festivals. It is perfect for outdoor venues, requiring no electricity and very little (or no!) amplification. I used the accordion at a school event when my choir was invited to sing at the local community tree-lighting ceremony in December. There was no option for electricity and the choir really needed some kind of accompaniment to assist with our presentation. The accordion fit the bill perfectly and the presentation was a hit.

Using the Accordion in My Elementary Music Classroom

The accordion is also a hit when I take it into my elementary music classroom. The students are intrigued from the moment they see the big suitcase and wonder what could be in it. They are every bit as excited as I was as a child seeing the accordion for the first time. I push buttons without creating any air and of course there is no sound. I push and pull the accordion to send air through the bellows without playing any keys or buttons and all that can be heard is a sound like Darth Vader breathing. They like that! Adding the air to the playing of keys and buttons creates a big sound that is sometimes initially startling, but they love it. We sing simple songs they know like “Twinkle Twinkle” and “Bingo” and I do a rendition of the “Bird Dance” which always brings someone to their feet doing the dance moves.

No accordions were harmed in the making of this blog post!

Looking inside an Accordion

I also take a partial accordion (courtesy of my accordion repair guy) to show the students so they can see what goes on inside the accordion. We can pass it around and I am not worried about what they will do to it. It also saves me the trouble of taking apart my working accordion!  The students are thrilled to be able to see the accordion up close and actually touch it.

Show and Tell in the Elementary Music Classroom

It is a treat to wander around the room and let each child push any button they want and see what sound is generated. On the big accordion there are a lot of buttons from which to choose and there are single notes as well as major and minor chords plus variants, so there is a lot of variety in the sounds that are produced. Someone inevitably asks if they can try to play it all by themself. Strapping on the accordion for the first time, they are amazed at how heavy it is. There is a lot of coordination required to push and pull the bellows AND to play any of the buttons. They are usually content just to have the experience of being able to strap on an accordion.

Just like the family get togethers when I was growing up, the accordion is a great addition to sing-alongs with students where the songs are simple 3-chord tunes, camp songs or familiar children’s songs. We can leave the music room and go anywhere and the music is portable and easily heard, even outdoors.

Andy and I love sharing some accordion tunes with students. At schools, we perform as the duo, Donna & Andy. We often invite the students to join us using some “kitchen party” instruments and I wander through the audience playing the accordion. Again, students are delighted to be up close to this interesting instrument.

We also like to add some tunes with beautiful melodies. The reedy sound of the accordion adds a unique flavour to traditional fiddle tunes and we have also created our own songs to highlight the accordion as we play festivals and other such venues.

I am certainly not included in any list of great accordion players, but it has been a source of great enjoyment in my elementary music classroom, and in the performances I have done as part of Donna & Andy over the past 25 years. Now that I have four accordions in my collection, the only hard part is deciding which ones to take and which ones have to stay home when we head out for a gig!

Watch some of the Donna & Andy Living Room Sessions - with Donna's Accordions.

Download “Lady of the Red Castle” and “Tune for Rhody”

Donna has taught elementary music for 35 years. As a Composer - Donna has over 400 published solo voice, choral, handbell, recorder, violin, accordion and piano compositions. She is an accomplished presenter and continues to perform in the duo "Donna & Andy"