Any self-respecting youngster who asked for a dog would be disappointed when a sister showed up instead! Everyone knows a dog will do things a sister would not. How could parents misunderstand that?

Written in a 6/8 blues style, this song includes jazz scoops and slides, an instrumental verse to accommodate improvisational contributions, and a few dips into the lower part of the vocal range. This song is the perfect vehicle for some theatrical, expressive singing. Older siblings are going to love adding this song to their vocal repertoire.

This song includes a version with an opening recitative, giving the singer the option of beginning the song with a theatrical explanation of how the arrival of their sister has caused them to sing the blues.

Follow along with the lyrics as you listen to the accompaniment with melody guide for I Got a Sister (but I wanted a dog). 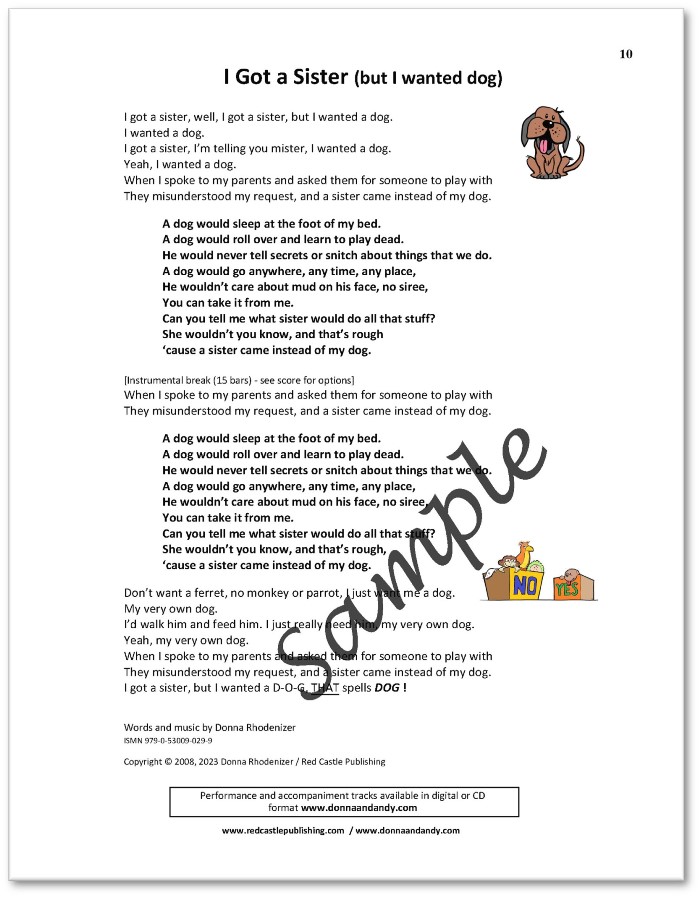 Part of a Song Collection

I Got a Sister (but I wanted a dog) is one of 12 songs from the award winning song collection "Blue Skies and Pirates" Click the link to see more about this fun collection for elementary-aged kids, choirs and solo vocal students. The 111-page book provides the vocal score, full score and separate lyrics pages for 12 songs. Enjoy!

Please note: audio tracks for the e-book version are sold separately. Print copies of the book include CD (24 tracks)

Blue Skies and Pirates (Donna & Andy performance and instrumental) audio tracks are available for download or physical CD on this website.

Stream or purchase from many music streaming sites including:

Get audio tracks and activities with a Donna & Andy Membership

Download (pdf), print and have fun colouring this page while you listen to the song I Got a Sister (but I wanted a dog). Enjoy 35 more colouring pages when you get a "Top of the Class" Donna & Andy Membership.

I usually try to be positive in my songs. I don’t have much time for, or interest in, wallowing in negativity. When it comes to the subject of siblings, there are lots of stories about wonderful family memories, but there are also lots of times when those beloved siblings irritate us more than just about anyone else we know! Why is it that the people we love can also be the most irritating?

I am the happy middle child, growing up with two older sisters until I was five, and then welcoming a brother, followed by a baby sister. As siblings go, we got along well. Nobody messed with our oldest sister early in the morning (or we learned to dodge the inevitable shoe that would head in our direction!) If you wanted someone to go looking for new kittens in the barn, my second oldest sister was the person to recruit. For climbing trees and riding bikes and tricycles, my younger siblings were the ones to volunteer for the job.

I didn’t like being bossed around by my older sisters who knew EVERYTHING. I didn’t mind stepping into the boss role when I was put in charge of my younger brother and sister. I guess where one is in the pecking order can have a lot to do with one’s satisfaction or unhappiness in any given situation.

There is lots of great angst floating around with regard to sibling relationships. Song lyrics were just begging to be written on this subject.  I wrote I Got a Sister (but I wanted a dog) as a perspective of an only child, or at least one of the older children in the family. I know that children often request a pet, and a puppy is such a wonderful addition to a family. What if a child asked for a playmate, waited expectantly for a puppy to arrive, and then received the shock of being introduced to a new baby sister instead? Horrors! I imagined things that would be fun to do with a dog that a sister would certainly not be interested in doing. Playing in the mud or rolling over and playing dead would probably not cut it. Then there are all the deepest, darkest secrets that can be told to a dog, with absolute confidence that those secrets would never be used against you!

As I wrote the blues style music for my song, we worked with Greg Simm, a fine guitar player and walking encyclopedia when it came to musical styles. He suggested that, although the tone of the lyrics was one of complaining about the sister arriving, we really didn’t mean the song to be dark and negative. The chords he added were often open fifths for the Tonic/home chord so it wasn’t strongly a minor sound, but had an openness to the sound. We utilized jazz scoops and slides for the melody and created our blues feel for the song.

At the end of the day, I Got a Sister (but I wanted a dog) captures the pique of a child wishing for a dog and not being impressed with the stand-in playmate sister that is presented. There is enough humour and lightness included to know that it is good natured grumbling, and really more about wanting the dog than about not wanting the sister. Perhaps if both had arrived things would be different!

I want to conclude my notes with a disclaimer. My younger sister has commented that she is not impressed with the perspective presented in this song. She has good-naturedly suggested it is a personal insult and she presumes it is autobiographical. I want to go on record as denying, 100%, that this song was based on any kind of actual fact. Sometimes a composer must take poetic license and use the imagination to write a song. I assure you (and my sister) that this is the case for this song. As they say in the movies,

“The characters and incidents in this song are fictitious and any similarity to the name, character or history of any known individual is entirely coincidental.”

Also, “No sisters and no dogs were harmed during the making of this song!”

Things go full circle. This is my sister with HER dog! 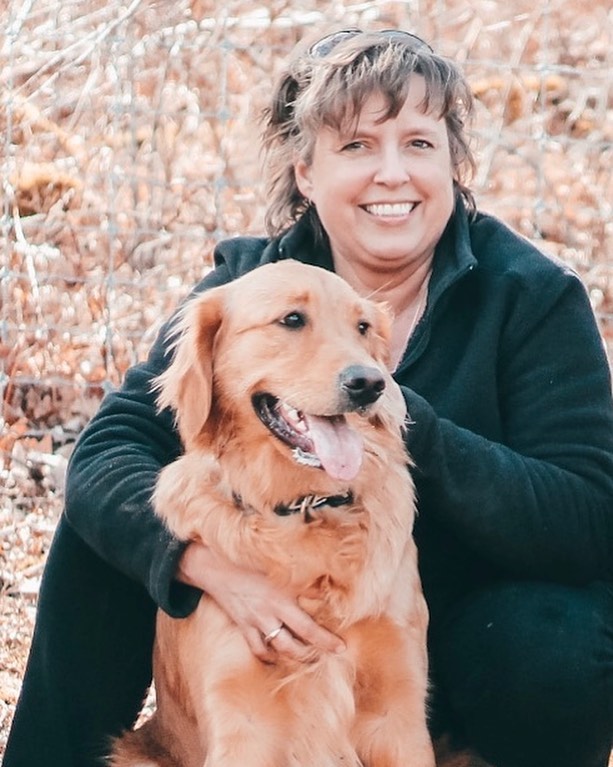 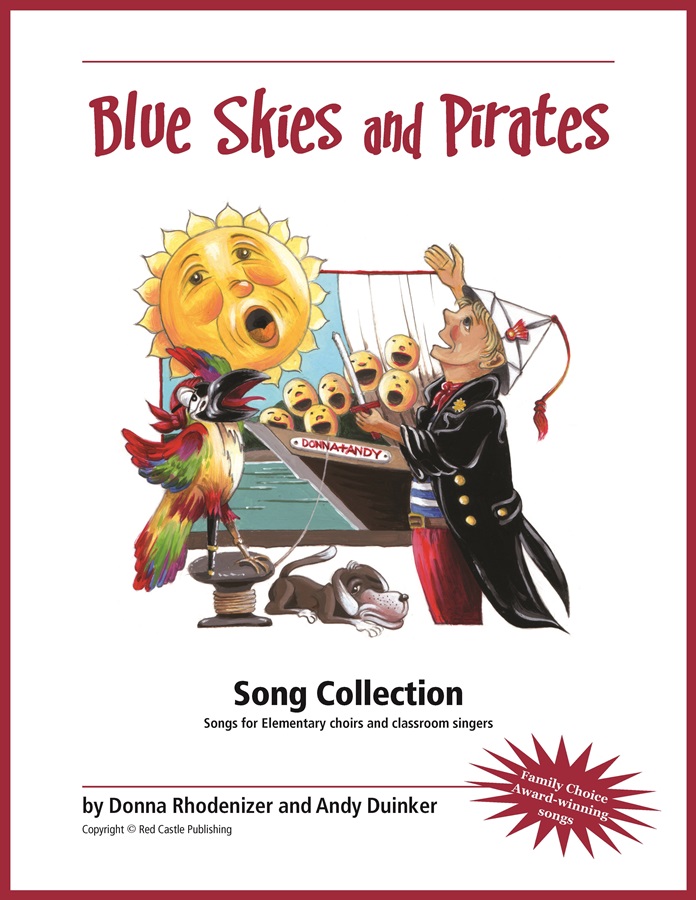 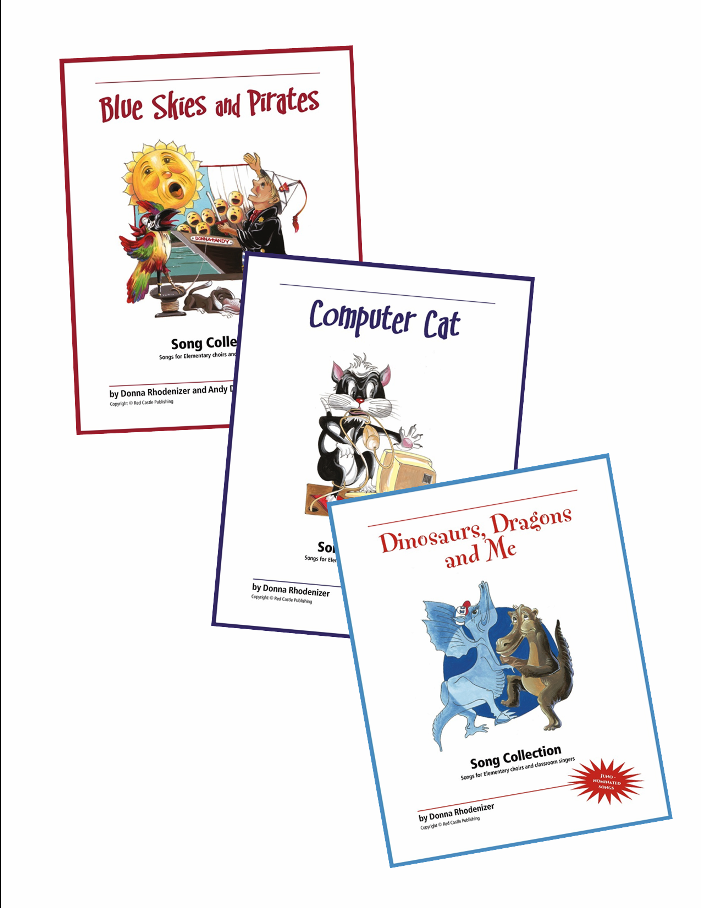 Related Products - age 10 and up

Send us your queries, questions, comments!

We would love to hear from you. 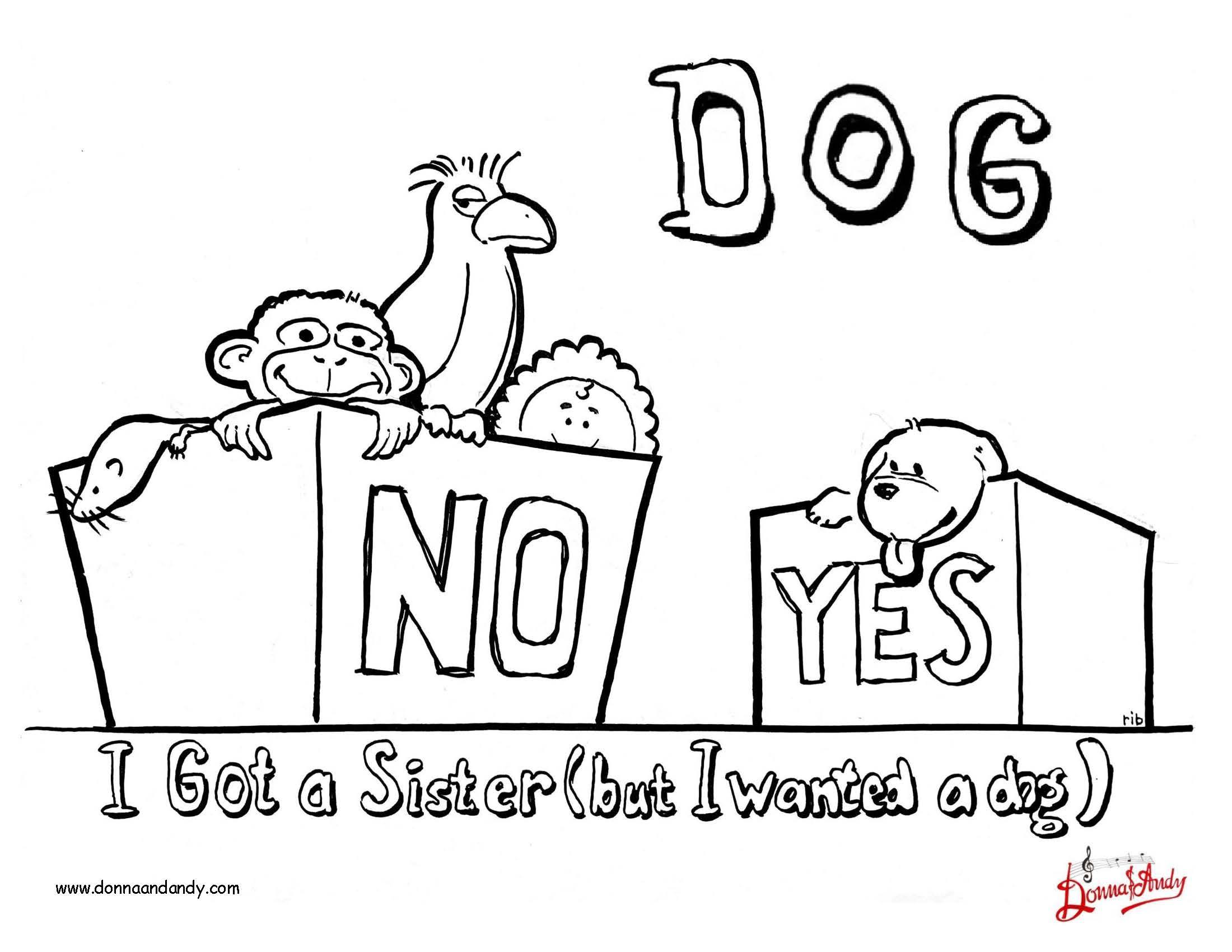